A cataract is a clouding of the lens in the middle of the eye. Infant cataracts are usually caused by a malformation of the lens during early intrauterine life and are hereditary in about 20% of cases. Cataracts in older children can occur as the result of a less severe malformation or following eye trauma. Vision will range from slightly to severely impaired. Severe cataracts occurring near the time of birth must be removed within weeks or vision can fail to develop normally and the eye will become legally blind (the medical term is “amblyopia”).

Less severe cataracts may initially be treated with patching therapy, dilating eye drops, and/or glasses. Pediatric cataract surgery is performed under general anesthesia. With modern instrumentation and techniques, cataract surgery performed by a pediatric ophthalmologist is considered safe and effective.

The lens inside the eye normally focuses light rays to a sharp point on the retina (in the back of the eye). After this lens is removed, the focusing power will need to be replaced with either a lens implant (inside the eye), a contact lens (outside the eye), or eyeglasses

Recommended for toddlers and older children, implants or IOLs  are designed to remain in the eye permanently. Implants avoid the magnification of cataract glasses and the need to insert, remove, and replace contact lenses. Pediatric implant surgery is more complex because of the special characteristics of young eyes; the power of the implant depends on the size of your child’s eye at the time of surgery and estimates of future eye growth and will be chosen to focus at an either near or distant target. Normal thickness bifocal glasses may be prescribed later to fine-tune your child’s vision.

Contact lenses are the preferred method for infants who have had cataracts removed from only one eye. Contacts make it easier to use both eyes together because they produce less image magnification than glasses. They are also aesthetically more appealing than glasses. Fitting is usually done within one to three weeks after surgery, and initial instruction normally requires one or two office visits.

Glasses are sometimes recommended when cataracts have been removed from both eyes. However, cataract glasses are very thick and magnify the appearance of the eyes. When the child is older, we can prescribe bifocal cataract glasses to provide focusing at both near and far distances. Later on, the glasses can be replaced with contact lenses or implanted lenses.

What causes Cataracts in children ?
Cataracts are usually seen in older individuals. However, children too can develop cataracts.

Sometimes an infant is born with cataract. This could occur because of some infection that the mother had during her pregnancy like German Measles. In a small percentage of cases it could also be genetic. Most of the times, it is impossible to determine the exact cause of development of cataract.

Cataracts can develop in childhood too often as a result of eye injury or disease states in the other parts of the body. It can also occur because of prolonged ingestion of steroids.

The surgery in children is done under general anesthesia and require an incision in the eye. Depending on the age of the child your doctor will take the decision of weather to implant a lens in the eye or not.

How is the vision going to be corrected after Cataract Surgery ?
After cataract surgery your doctor will prescribe your child glasses. Depending on whether a lens was implanted in the eyes or not your child may have a low or a high power. The decision whether to implant the lens or not is made by your child’s eye doctor depending on the age of your child.

If your child has amblyopia (laze eye), he or she may also require patching of the better eye to stimulate the weaker eye to read. Read the brochure on ‘Amblyopia’ to understand more about this condition.

What is Abmlyopia ?
Amblyopia is a condition in which on examination your child’s eye is completely normal however the vision is less than normal in that eye. This decrease in vision could be due to multiple reasons. One of the reasons is cataract. To treat amblyopia you will have to patch the good eye so that the eye with poor vision is forced to be used and gradually there is a chance of the vision improving. Please read ‘Amblyopia’ to understand more about this condition.

What is Strabismus ?
Strabismus is another name for squint. Here one of your child’s eyes has deviated. There are various types of strabismus and one can learn more about this condition. This condition is usually treated by eye muscle surgery when the eyes are realigned. You would be able to see some pictures of patients who have undergone squint surgery here. 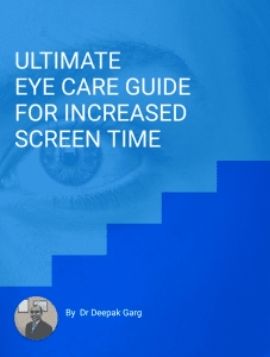